Why Apple Card Could Become the iPhone of Virtual Cards

Apple is betting that improving the antiquated UX of credit cards will add enough value to make Card a game-changing product.

When Apple CEO Tim Cook unveiled the Apple Card at an event on March 25, he promised “the most significant change in the credit card experience in 50 years.” Many in the industry shrugged it off.

“My reaction when I saw the announcement was, competitively, all of the features that are in that card are offerings we have today,” said Bank of America’s head of technology and operations Cathy Bessant.

“Unless you spend more on Apple products than gas, groceries and restaurants combined, there are many better rewards cards for you,” tweeted payments guru Peter Berg.

Snarked one payments startup founder, “Apple will make it really simple for millennials to get into debt.”

Most reaction to the Apple Card, in fact, has focused on how unremarkably it compares to countless other programs out there. The interest rate will fall somewhere in the thoroughly mainstream 13%–24% range and the cash rewards program is not particularly generous.

If successful, Apple Card could disrupt the credit card industry as drastically as the iPod changed music and the iPhone changed mobile phones. It would align with Apple’s tradition of onboarding a critical mass of consumers onto an important new format of technology—in this case, virtual cards—on the strength of branding and beautiful user experience.

The media’s chirping about the Apple Card has mostly hinged on the program’s lack of novelty. And they’re right: ultimately, the Apple Card is a decent, no-fee MasterCard with an Apple logo on it that can sit alongside all your other credit cards in Apple Pay.

But Apple didn’t set out to reinvent the way points systems worked. Essentially, their innovation was to view the traditional credit card through the lens of Silicon Valley product design. They discovered so much friction in the user experience (UX) of a traditional credit card that, they wagered, simply streamlining the interaction would create value. It’s what Apple does best, after all.

The result is an entirely new credit card experience that will feel more organically enmeshed with natural user behavior than any other card in history. Rather than existing as a remote, freighted object in your pocket, Apple will transform the credit card into a user-friendly app native to the device you’re probably looking at right now.The metal card, while sexy, is like if Apple sold first-generation iPods with tape deck adapters.

And innovation in the credit card space is long overdue. The objects themselves have changed very little since Diners’ Club cards debuted over sixty years ago. They’re still pieces of plastic or metal that live in our wallets, transmit numbers with a physical element embedded in the card, and require numerous, largely hidden institutions to complete a single transaction. Incredibly, it was only last year that credit card networks finally stopped requiring merchants to obtain signatures.

It’s true that innovation in the industry has focused in arguably more meaningful areas. Cards today deliver more explosive rewards systems than they used to (often at the expense of cardholder benefits)  and security has gotten better.

But for every points hound out there, dozens of everyday consumers want a payment method that just works, that’s not going to scam them, and that they understand. They don’t want to learn about theft for the first time when the card doesn’t work at a checkout counter. They don’t want interest to catch them by surprise. They don’t want nickel-and-dime fees and spectral, unhelpful customer support.

The way Apple sees it, all of this falls under the purview of UX. When interacting with the Card on an iPhone feels natural, for example, they can ask you to confirm every transaction via push notification and it doesn’t feel like a hassle. That’s a huge boon for security; a user would recognize a fraudulent purchase attempt in real time.

If you have more than one device entwined in the same ecosystem, two-factor authentication is easy—which means Apple Card can require it for every user who signs up. If you already trust the security of Apple’s walled garden with your sensitive data, you’ll trust their claim that your spending data is invisible to them. 1 And if you’re able to quickly access the app where this card lives, freezing your card number and generating a new one is convenient. Better UX, in short, means better security.By improving antiquated UX, Apple’s betting it has changed the aspect of credit cards that matters most to customers.

It also means better data. One of the more eye-popping aspects of the Apple Card is the promise of clean vendor names in the place of those unintelligible alphanumeric strings you’re used to seeing on your credit card statement. Apple’s trick is to combine transaction data from the card with location data from your phone. If your phone was at a Wal-Mart at the same time a transaction from Wal-Mart was recorded, Apple will associate the two in a legible way. Once again, security and UX align.

Even payments and the fee structure have been smoothed over in a nod to UX principles. Open the card in Apple Pay and you see a simple, bright set of charts helping you understand your balance and minimums. Additionally, the company claims Apple Card will charge no cash advance or late fees. There’s no way to verify these claims at this point, but it’s notable that these simplifications adhere to the minimalist aesthetic that Apple uses everywhere.

Most of all, Apple Card is designed to be a digital-first experience. Yes, having a physical card is nice. Everyone loves the “thud factor.” It’s why even many debit cards are now issued in basically military-grade metal, including the titanium Apple Card.

But physical cards get lost and stolen. Having a secure, cloud-based virtual card with an optional physical extension is far preferable to having an all-important object sitting in your pocket. Apple Pay uses contactless NFC technology to transmit data securely at the point of sale, and if this product catches on, more and more merchants will support compatible systems and sunset the magnetic strip permanently.

Like the great Apple products of the Steve Jobs era, Apple Card aims to sell its loyal and ever-growing customer base their first and last experience with a breakthrough technology. In this case, the technology is virtual cards.

A virtual card is a number connected to your credit card account that allows you to transact without revealing your actual, permanent credit card number. A traditional card has this number embossed on the front, requiring you to cancel and replace the whole card if it becomes compromised. With virtual cards, you can have many card numbers attached to one account, each potentially adhering to strict rules set by you: expiration date, vendor name, and so on.

Virtual cards are extremely valuable for security, convenience, financial control, and access. Unfortunately, the culture of US payments has never met a financial innovation it didn’t delay implementing. 2

Apple apparently got tired of waiting. They might have cast a restless eye to China, where payments are dominated by the massive mobile entities WeChat Pay and Alipay. Each of these platforms processes more in one month than PayPal does in an entire year; they’re effectively the de facto method of payment across the country. For Apple, a company in search of new revenue streams and with a very large, sticky mobile user base to work with, the time to get the US bought into mobile payments was now.

Selling virtual cards to the American masses was always going to be a long project, but Apple might be the company to do it. They’ve historically been good at designing hardware and UX enjoyable enough to help shepherd consumers through a Cartesian split between the physical and the digital. It was the iPod that helped listeners decouple their music from those plastic discs on their shelves, and it was the iPhone that took away the security blanket of a keyboard. 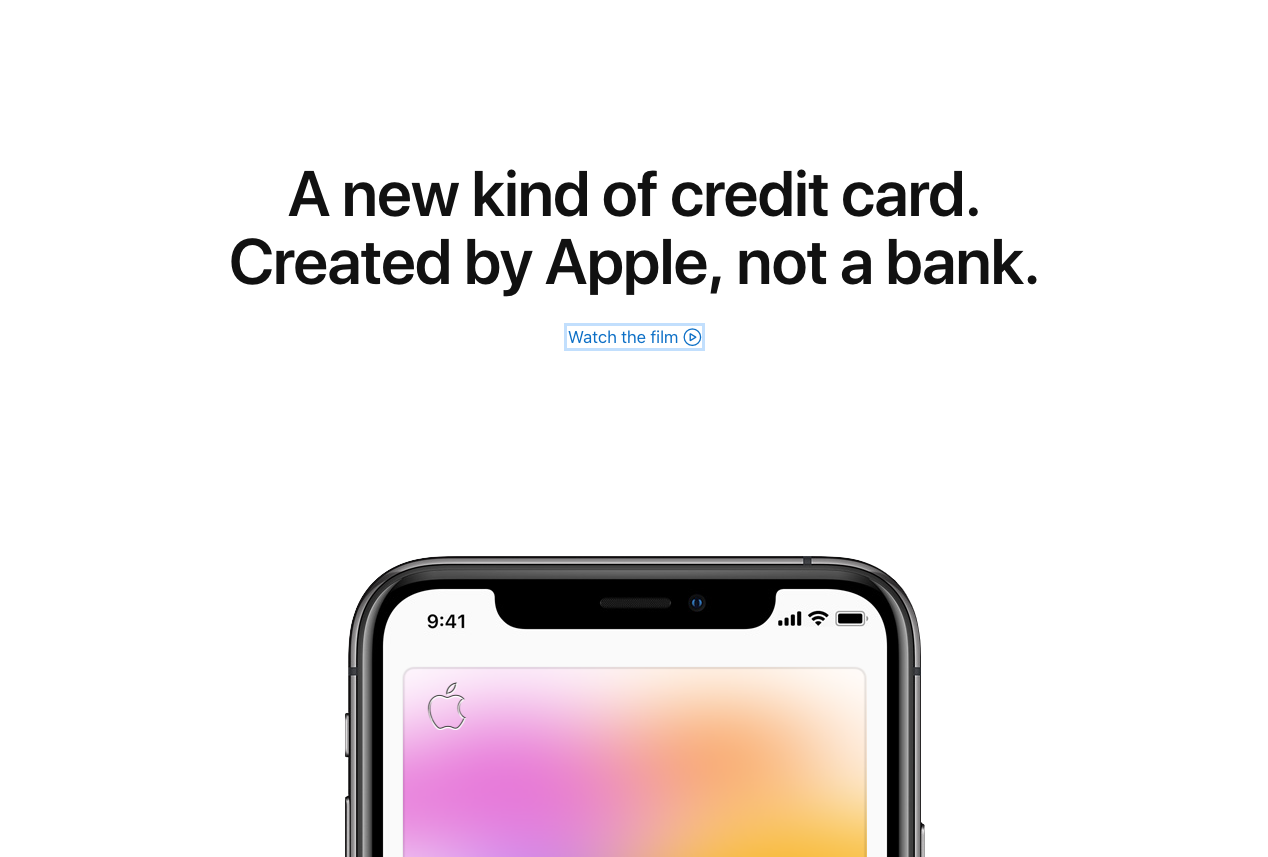 Unless you were to consider Goldman Sachs a bank.

Just as many of those consumers never went on to own a smartphone that wasn’t an iPhone, the introduction of Apple Card—the first natively virtual credit card marketed to the masses—is part of a larger effort to germinate virtual payments in the US in the Apple ecosystem. (Notably, the rewards structure disincentives using the physical card versus the Card app.) The metal card, while sexy, is like if Apple sold first-generation iPods with tape deck adapters. The long-term goal is to normalize the use of virtual accounts and mobile payments.

It might explain why Apple doesn’t mind partnering with established financial institutions to issue the cards and manage the data. They’re likely not worried about collecting interchange fees just yet. For now, they want users to like, and then prefer, and then expect the experience of managing their spending with Apple services.

So for all the talk of how pedestrian this initial Card offer is, you’d be crazy to write off Apple’s ability to win at their long game. If they manage to make their products anywhere close to a default payments app in the American economy—with the head start of approximately half of US mobile customers—they could become a power that dwarfs even what they are today.